Remember the awesome cartoons Nickelodeon and the Cartoon Network used to put out back in the day for kids? Some would say those days have passed, others would merely point out that tastes change. What is certain is that solid gameplay remains solid gameplay no matter what the subject matter, and Dexter’s Laboratory: Robot Rampage is an example of some great, under-appreciated gameplay using source material that is some of the best stuff Cartoon Network has ever produced.

Developed by Taito for the Nintendo Game Boy Color, Dexter’s Laboratory: Robot Rampage came out in 2000 at the height of the cartoon show’s popularity and featured the iconic cast and characters fans had come to know and love in an action-scrolling platformer game that combined some of the best of Mario with the ability to use tools and weapons to progress through each stage.

Dexter can use various tools and weapons as well as three different Dexter suits, though these do not impact the gameplay in any meaningful way. Every boss ends with an encounter with a lineup of robots that Dexter has to clear out before he can move forward. This is pretty much standard operating procedure for a lot of classic video games and Dexter’s Laboratory: Robot Rampage does not really change the formula much in this regard. This could be a good thing or a bad thing depending on your perspective.

Upon release Dexter’s Laboratory: Robot Rampage wasn’t maligned nor was it beloved. It simply existed. But there’s a lot here to offer the game who enjoys platformers or puzzle games with a dose of over-the-top action. One of the biggest advantages in Dexter’s Laboratory: Robot Rampage’s favor is its variety. There are so many different ways to approach each situation in the game and there’s really no reason to get bored. Some of the end-stage encounters are a bit of a letdown, but this is the era of video game design where stages barely even exist so most modern players probably won’t notice this absence.

The graphics and sound are good for the Game Boy Color but the gameplay is where this gem shines. If you’ve watched Dexter’s Laboratory on Cartoon Network, most of the design should be familiar to you but if not it may come off as generic cartoon aesthetic. Fear not, this is true to the series and features a lot of the iconic characters and settings you’ll see in the show.

You could do worse than Dexter’s Laboratory: Robot Rampage and you might struggle to do better. Give this retro title a shot and see what it’s about for yourself. 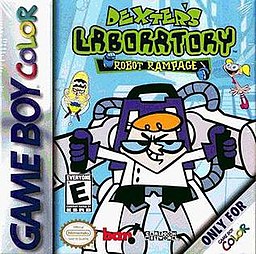