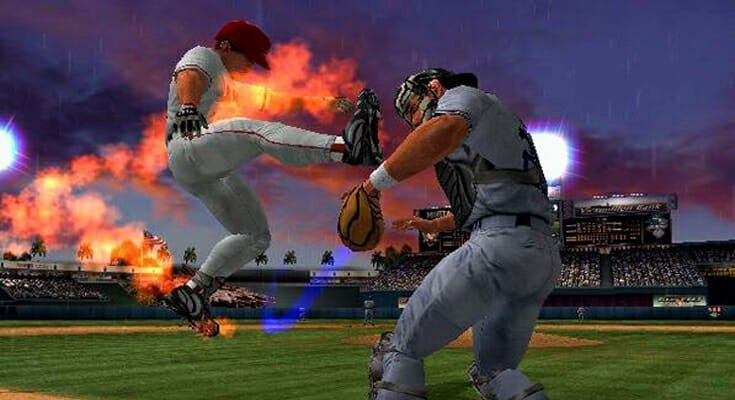 If there is one genre that is often criticized for making what many consider to be only incremental changes to the core gameplay it would sports games. Of course, there are those that would counter this argument by pointing to the relative glacial pace of changes in sports themselves.

That doesn’t mean that many developers haven’t tried to add a new twist to the old sports title here and there. And with some market standouts like Midway’s line of arcade games from the mid-1990’s, it can often be profitable for devs to do so.

The trend in sports games towards extreme expressions of the genre really had its zenith in the early 2000s. Continuing the grand arcade tradition established by titles such as NBA Jam, NFL Blitz, and even WWF Wrestlemania The Arcade Game, MLB Slugfest takes a traditional sports and adds some twists to it, in this case a vibe that can best be described as a pick-up game meets Grand Theft Auto.

Developed by Sports Mogul and Gratuitous games and published by Midway, the MLB Slugfest series takes a more “street style” approach to the baseball genre. What does Midway mean by street style? Aside from colorful commentary and stadiums ripped straight out of someone’s backyard, player’s can also get into fights with other players by attacking them. How’s that for a Sunday out at the field?

Heck, MLB Slugfest was the first sports series to receive a Teen rating for its depiction of violence and use of colorful language. Those looking for a straight up baseball game will probably be disappointed with the MLB Slugfest series, but those gamers that crave something a little different will find a lot to enjoy.

There are currently four titles in the series: MLB Slugfest 2003, 2004, Loaded, and 2006. Of particular interest to fans is the 2006 iteration of MLB Slugfest. This game is often used for parodies and memes because of its frequent glitches and overall campy presentation. It is going for hard but in all the wrong directions and ends up being hilarious as a result.

Aside from the aforementioned MLB Slugfest 2006, the series is pretty solid in terms of gameplay and graphics. Sure, some of it seems wicked dated by 2018’s standards, but back in its time it was pretty much normal wash cycle for video games of this ilk. While early 2000’s attempts at being badass don’t induce the same levels of cringe as the 1990’s obsession with everything “xtreme,” MLB Slugfest does produce a lot of inadvertent laughter for its earnest approach to what is otherwise a silly concept. Perhaps that is why the series is dormant today. Unlike the other games mentioned, such as NBA Jam, MLB Slugfest never ceases to take itself very seriously and for those of us playing it today that’s just impossible to do.