There are quite a few people who still game today that remember the arcade scene of the late 1990s. One game that was huge during this time is the legendary NBA Jam, an arcade sensation that not only broke genre lines but built up a massive following with mainstream audiences. With its zany gameplay and a huge roster of players, NBA Jam was everything people needed but didn’t even know they wanted. This was also the era of fighting game dominance, with Street Fighter II and Mortal Kombat ruling everything in the arcades. For NBA Jam to stand out, it had to be something special – and it was.

Like all blockbuster games of the era it was ported to nearly every conceivable console format, including the Sega Master System. Released on Jam Day (March 4, 1994), NBA Jam went on to become one of the best-selling sports games of that year on consoles. It combined arcade action with competitive spirit for a winning formula that many similar games follow even now.

So what does NBA Jam for the Sega Mega Drive have to offer modern players? Well, outside of a fun, competitive experience, NBA Jam is a change of pace from the more serious games of today like FIFA. NBA Jam focuses on quick, arcade-style action. Strategy is there, but it is not as important as constantly pressing your advantage or staving off your opponent’s advance. Stats matter, but flare also matters. NBA Jam rewards players for off the wall play and the traditional rules of the sport really don’t apply in this game.

Players looking for something realistic might be disappointed with NBA Jam. On the other hand, players seeking a more cartoon approach or a light-hearted foray into basketball will find a lot to love about NBA Jam. For the Sega Mega Drive, the sound and music are excellent but pale imitations of the arcade sound. The graphics mimic the arcade as much as possible but a lot of the unique style is lost in translation.

NBA Jam for the Sega Mega Drive is loaded with secret characters and features. Playing the game with a friend will really unlock its full potential. The game becomes a completely different experience when you are competing with a friend. And the best part is, unlike many sports games out there, your friend doesn’t need to know a thing about basketball to find NBA Jam enjoyable. It encourages people who know nothing about the game to pick it up and it doesn’t punish people for lacking some knowledge of basketball strategy.

If you’re looking for a quick pick-up-and-play from the retro aisle then you can’t do much better than NBA Jam for the Sega Mega Drive. There are a couple of other versions out there and really the only major difference between each is the graphical fidelity and sound quality as well as a few hidden characters and secrets here and there. Easy to play but hard to master, NBA Jam for the Sega Mega Drive should offer hours of fun to the retro gaming fan. 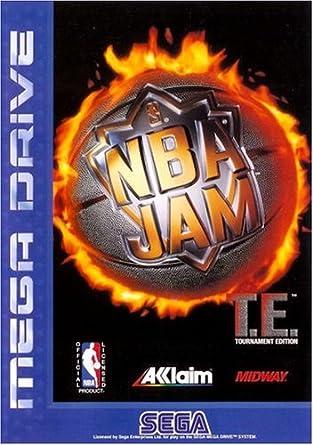