Wolfenstein VS DOOM – The battle of the first person shooters!

Most gamers would be hard pressed to come up with two more iconic titles in the first-person shooter genre than Wolfenstein 3D, the one that started it all in many respects, and DOOM, the sensation that changed video games for forever.

Now ubiquitous and common, the fps genre was originally a novel idea. Wolfenstein 3D, developed by id Software and released in 1992, had all the makings of a classic but in a new, wholly unfamiliar format. Viewed from the vantage of the player character, the world took on an immersive (if faux) 3D effect. Traversing corridors and gunning down Nazis felt immediately visceral in a way games had not felt before. True, games like Battle Tank did some similar things albeit without people, Wolfenstein 3D was the first to fully realize it in full color pixels and detailed graphics. In short, it was a mind trip of a game.

But hold on to your horses because id Software wasn’t done there. With the release of DOOM, done in a similar vein to Wolfenstein 3D, the company not only unleashed a gaming titan but also created a whole new era of gaming. While no longer used, the term DOOM-clone described any fps game that was not DOOM itself. So imagine all of the Call of Duties etc. being labeled that way and you get some idea of how utterly massive DOOM was. Released only one year after the wildly popular Wolfenstein 3D, DOOM put the combat in space and added demons instead of Nazis into the mix. With an admixture of Satanic symbolism and 1990s edge, DOOM was an amalgamation of all of the best of the decade and was believed by critics of video games to also represent all the worst of that same period.

Wolfenstein 3D was id Software’s first major title after its wildly popular Commander Keen series and it was radically different from that game. The company wanted to move away from the more family-friendly series and into something different. This is when DOOM guy John Romero suggested they remake the old shooter Castle Wolfenstein as a 3D shooter based on the engines John Carmack developed. Id Software partnered with Apogee to release the game in three parts and it was an instant success both critically and commercially. While many people credit DOOM with founding the fps genre, in reality it popularized it from many respects.

Conversely, running off of the success of Wolfenstein 3D, the id Software team turned to DOOM which, like the contrast between Commander Keen and Wolfenstein 3D, would provide a stark contrast between itself and the previous game the company developed. While the rest of the id team worked diligently on the Wolfenstein 3D prequel Spear of Destiny, John Carmack branched off and developed what became known as the DOOM engine. It was decided early on that the game would take place in space and feature all sorts of crazy alien stuff. In addition a DOOM Bible was developed to keep everything cohesive in the narrative. Many of the elements discussed in this document were later discarded, leading to a more vague narrative than originally intended. This doesn’t stop fans from filling in the gaps, however, and numerous novelizations as well as a movie brought the franchise’s story to the masses in realms outside of video games.

Wolfenstein 3D, for its part, relied on the classic trope of Nazis and Hitler, villains that need little establishment and tend to have maximum effect in the evil category. Roaming through endless corridors filled with Nazis, BJ Blazkowicz was a bad ass guy and you knew it from the beginning. The Nazis were “scary” but not in the sense of DOOM’s horrifying creations. The two games share gameplay styles but the atmosphere of each is so radically different that the effect is changed.

Don’t get us wrong, DOOM guy is also a tough man but he’s also facing down the minions of hell. Things are just different when you are dealing with a Baron of Hell as opposed to some guy yelling “Achtung!” at you. In addition, DOOM takes place on a derelict space station based on one of Mars’ moons. Everything is dark and foreign and the sound, rather than being annoying as in Wolfenstein 3D, really lends itself to the terror. Nothing sucks more than hearing some enemy yell at you in the pitch darkness and this is something that happens often in DOOM. 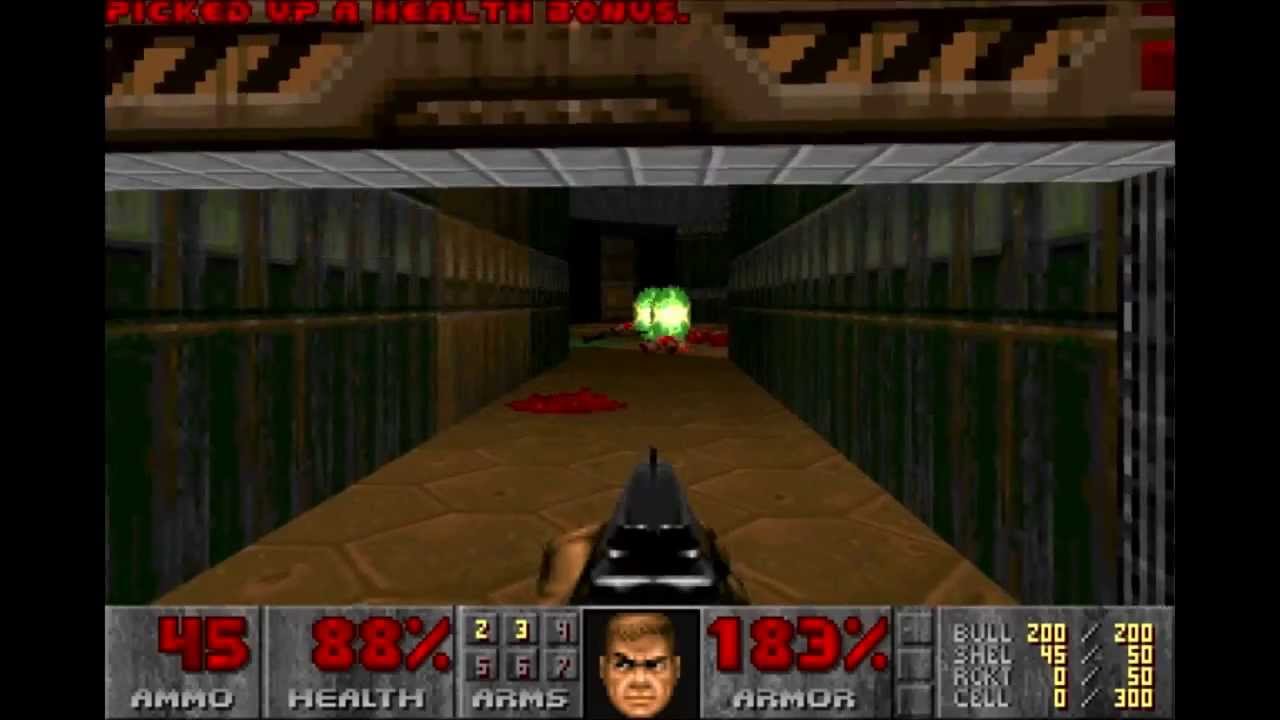 Wolfenstein 3D was, in many respects, true to its spirit. As a “remake” of a classic arcade-style shooter, Castle Wolfenstein, Wolfenstein 3D tried to emulate the run-and-gun perpetual movement often associated with that kind of game. Terror, if it entered the equation, was emergent. The real goal was getting to end and killing everything in sight. DOOM on the other hand offered a more layered experience, utilizing sound, atmosphere, graphics, and music for a total package where horror was part and parcel with the experience.

So it really boils down to ultimate impact, and this is a hard question to answer. While there’s little doubt that DOOM would have happened in some way, especially since it was in the nascent stages towards the end of Wolfenstein 3D’s initial stages, would it have become as popular if the groundwork had not been laid by the previous game?

Probably, and that’s because the game really is such a combination of strengths in one form that it cannot be overlooked. Wolfenstein 3D definitely brought the genre to light and founded it in many ways but it would not be where it is today without DOOM. One thing that is hard to quantify is the cultural impact DOOM had on the industry. It spurred debate about violence in video games, it kicked off the multiplayer revolution, it was one of the first “shareware” games to explode into mainstream popularity, and, like TETRIS, is one of the only games you can find on nearly every system, every format ever released since its debut. If that’s not impact, we don’t know what is. It’s hard to know where the fps genre would be without DOOM but we definitely know that it is here in many ways because of it.

The post Wolfenstein VS DOOM – The battle of the first person shooters! appeared first on Funstock.